I Found JAPAN In Lahore….!
Being a food lover and an explorer, i was blessed to taste and try European, Asian and African cuisines during my travels around the world; but Pakistani chefs have always sublimed my taste buds. Being a typical Pakistani my longing for native Pakistani restaurants and their fusion international food has always inspired me, being away from my country for over two decades now.
In my days in Pakistan i.e in 80 ‘s and 90’s, Chinese restaurants were our only deviation from a routine house meal, but now in my recent travels to Pakistan I was astonished to see a number of international cuisine restaurants making their way into weekend luxury meals of almost every household. 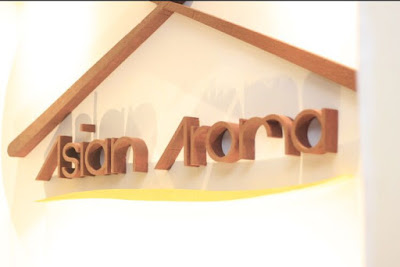 It was a foggy evening in Lahore, the city of fascinations, when one of my friends mentioned the the new culinary wave, a Japanese Restaurant – Asian Aroma, Park Lane Hotel famous for its gourmet dining — something you can only authentically eat in that one place. The friendly manager led us through the hall with a flexible layout for both bar and traditional table settings. The neutral color was complimenting the fine dining experience and yet soothing to the eye and sophisticated enough for the cuisine in hand. 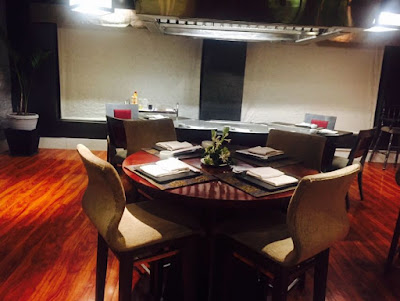 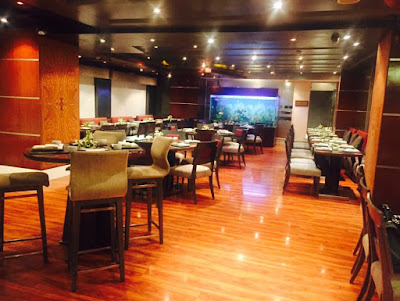 I lowered my eyes on menu pages, which were thick with a variety of Japanese, and English names and that seemed only to get more densely crosshatched as time went on, and for good reason as all were mouthwatering to choose from.
The dozen or so meals I could recognize from my previous experiences in Japanese restaurants had been a marvel of consistent variation, ringing fluid changes of texture and flavor on those three little words that define the cuisine of this island nation at its heart: iso no aji, or “tastes like ocean spray.”
To my dismay I could not choose after going through the menu at least three times. I guess Chef Abdullah from across the bar tables could see the frustration and came to our rescue. He not only recommend some of the hot favorities but also the explained about the ingredients and origins of the dishes.
We were happy to finally place our order and were left to enjoy the chitchat in peace. But that was not for long, quite soon, in fact precisely after twenty minutes the aromatic and beautifully presented dishes were laid out before us by a humble gentleman Shehzad. 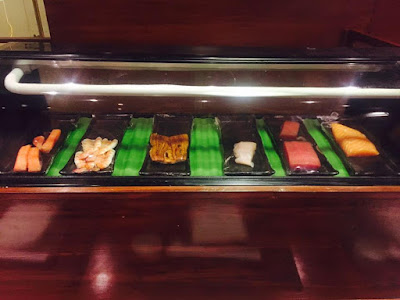 A wide variety of vegetarian and non veg foods were served in small portions, using one of five standard cooking techniques as mentioned by Chef Abdullah. All foods were divided into five color groups (green, red, yellow, white, and black-purple) and six tastes (bitter, sour, sweet, hot, salty, and delicate). Two uniquely Japanese foods are sushi (fresh raw seafood with rice) and sashimi (fresh raw seafood with soy sauce); both rely on freshly caught fish or seafood and Asian Aroma ensures that. Dishes prepared in a single pot (nabemeno ) was the real fascination. Sukiyaki the dish made up of paper-thin slices of beef (or sometimes chicken), vegetables, and cubes of tofu cooked in broth was divine. Shabu-shabu the beef and vegetables, also cooked in broth but then dipped in flavorful sauces. A gulp of green tea followed by a mouthful of chopstick picked portion of sea Was a whole new Japanese experience with a delicate flavored taste of ritual and I will bother them again for sure during my next visit to Pakistan.
Share Post: